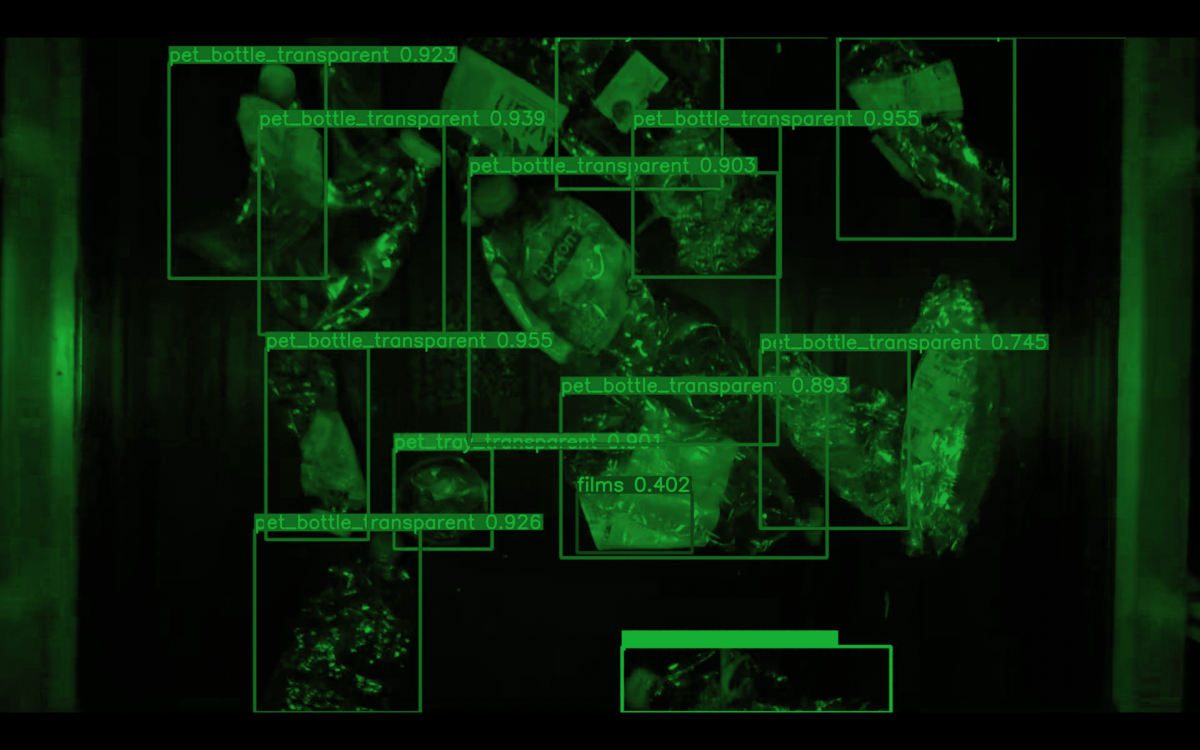 23rd May, 2022 – After installing the first waste-sorting robots of their kind in material recovery facilities across UK, France and Italy, Recycleye is now bringing its innovative AI-powered computer vision system and robotic picking technology to the German waste management industry.

Recycleye is a leading technology company developing computer vision systems and robotic pickers to automate the sorting of dry mixed recyclables in facilities, using artificial intelligence.  Now, the company is bringing its innovative robotic sorting technology, known as Recycleye Robotics, to Germany through participation in Veolia Germany’s U-Start programme. The programme fosters cooperation with innovative start-ups in the fields of circular economy, climate protection and resource efficiency, and aims to reduce the time to enter the market with new concepts for a better world. Confident from success already achieved elsewhere in Europe, it seems logical for Recycleye to introduce this proven technology to the country with the highest recycling rates in Europe.  In September 2021, Recycleye installed the first AI-driven robotic picker of its kind in England, to remove contamination from a split-stream plastics line, in partnership with FCC Environment.

Since then, the Microsoft-backed company has installed a further 12 systems, including robotic pickers at Bryson Recycling in Northern Ireland, and several facilities in France. Their innovations have also reached waste sorting facilities in Italy, where they have partnered with Acea Ambiente to install the first computer vision waste analysis system in the country.

These installations have achieved significant results to date, including up to 55 successful picks per minute, less than 1% contamination and an increase in output volume of target material by 12% at some sites.

By leveraging this technology, German waste sorting processes could sort to higher granularities with more efficiency, extracting valuable recyclates such as food-grade PET from residual lines. This would lower the cost of waste sorting, whilst increasing the profit margins on resale bales due to higher purity of material.

“By rendering recycling a more economically attractive proposition, our technology will prevent more of Germany’s valuable recyclable materials being lost to landfill – proving that waste doesn’t exist, only materials in the wrong place.”

In response to the high OPEX associated with manual picking in MRFs, Recycleye developed an AI-powered computer vision system, which identifies every item on a waste stream to material and object granularity using a low-cost camera and machine learning algorithms. This human eye replicate can then be integrated with Recycleye Robotics, a robotic picker developed in partnership with world-leading manufacturer FANUC, which automates the physical task of separating waste items into pure material streams. 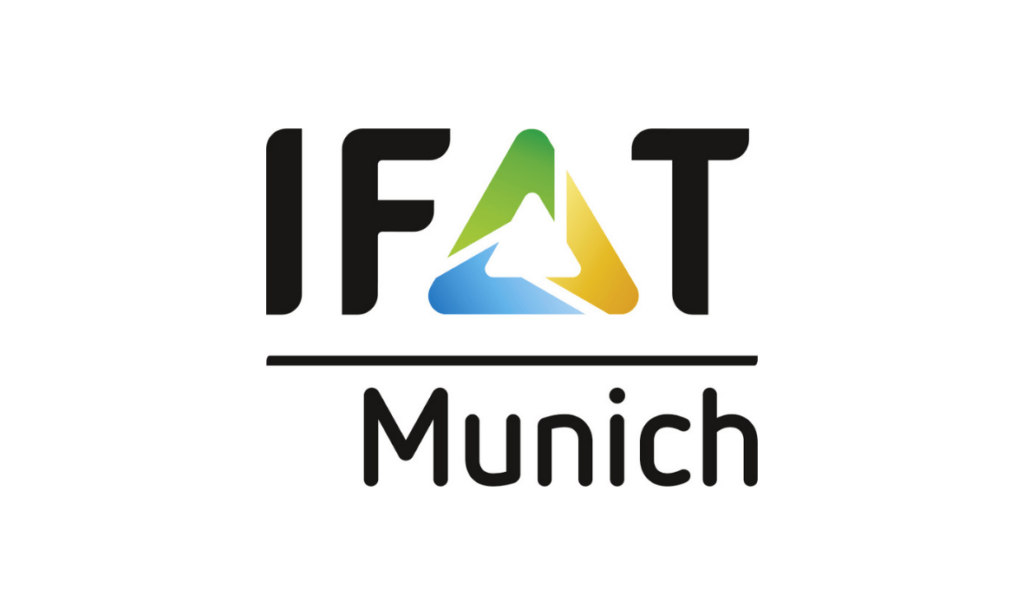 Recycleye is exhibiting at IFAT 2022, the leading trade fair for environmental technologies in Munich on 30th May – 3rd June. As the European leader in recycling, and long-considered leading nation in technological innovation, Germany is the prime geography for the expansion of this development.

If you are heading to IFAT and are interested in automating your quality control through AI and robotics, book a meeting on our stand here. The Recycleye team and I will be exhibiting in the Start-Up Area (139/338) in Hall B4, on Stand 34.

Read this Story in the News 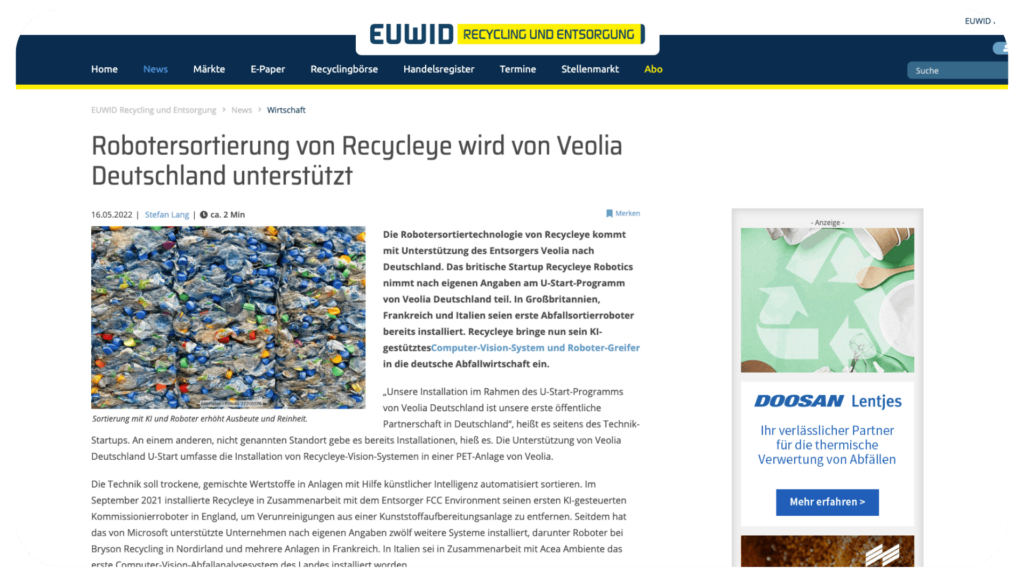 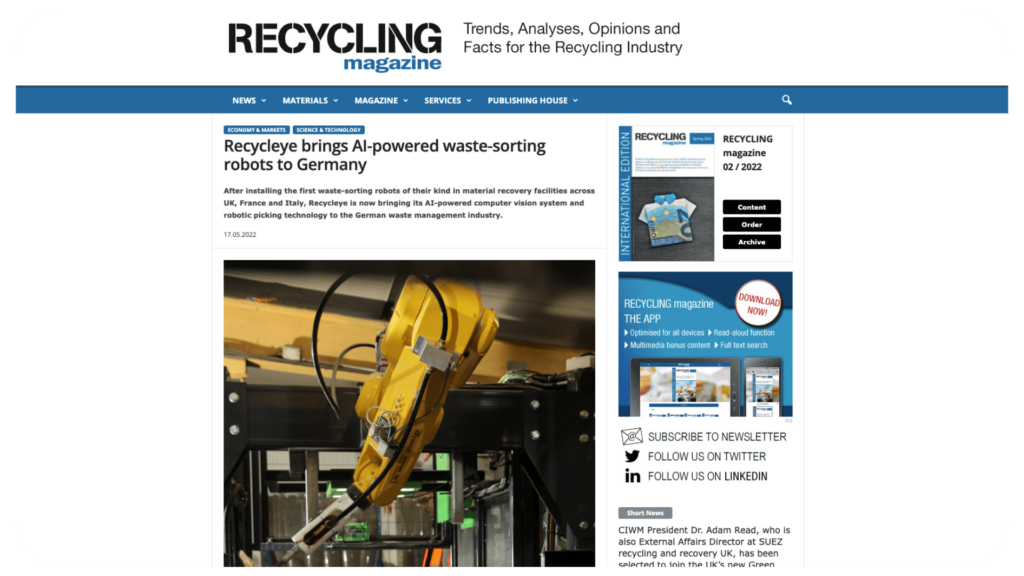 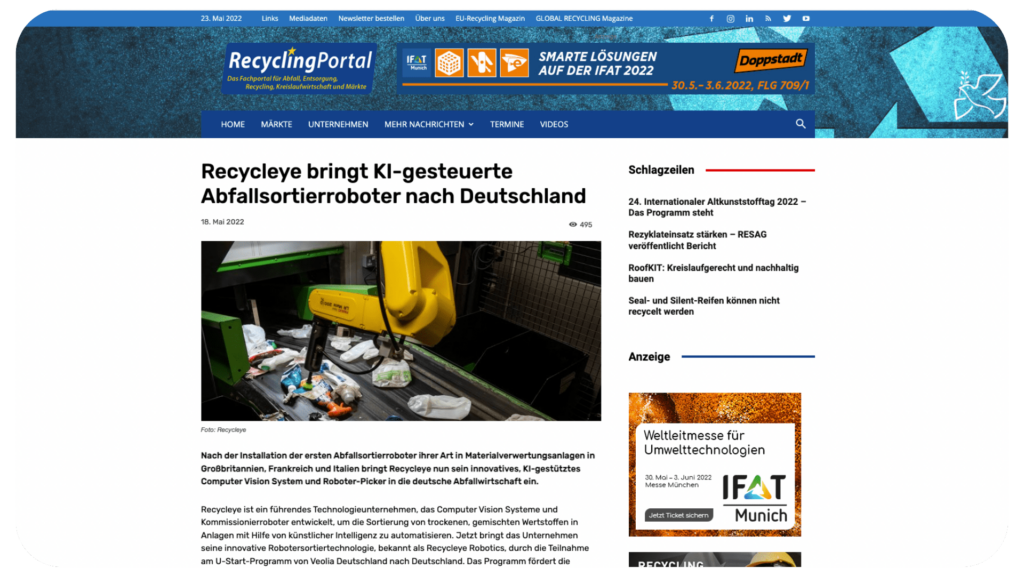 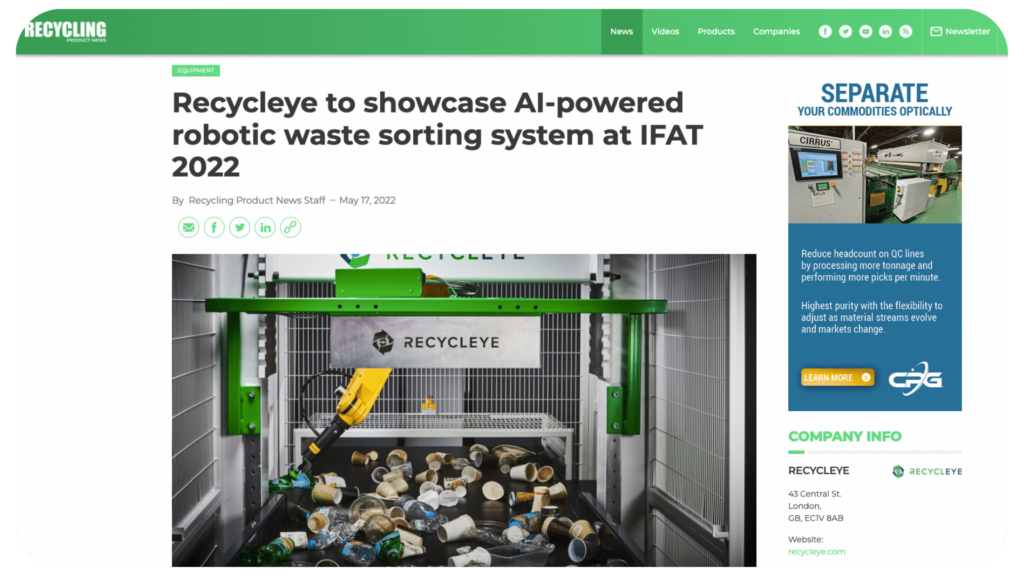 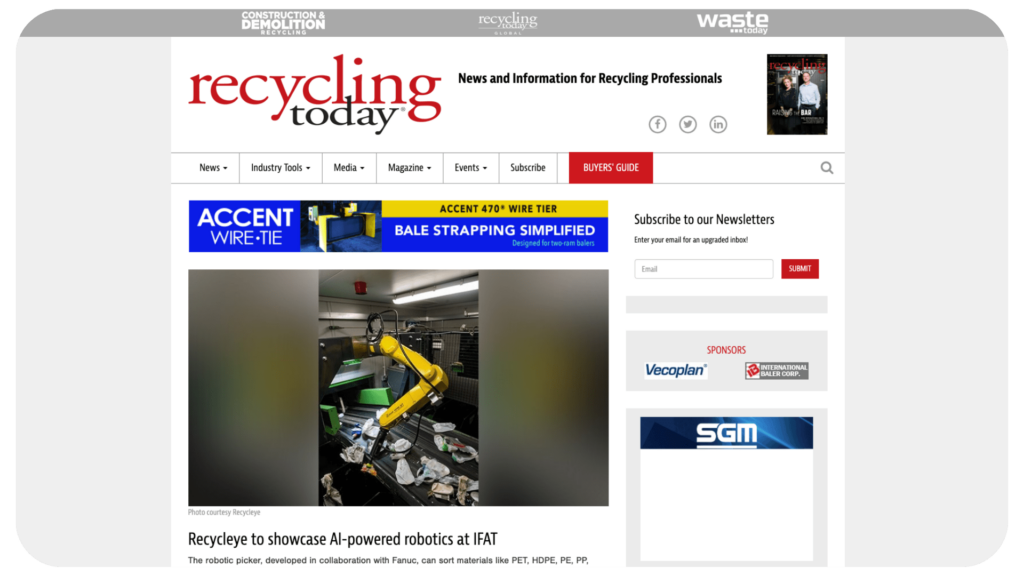 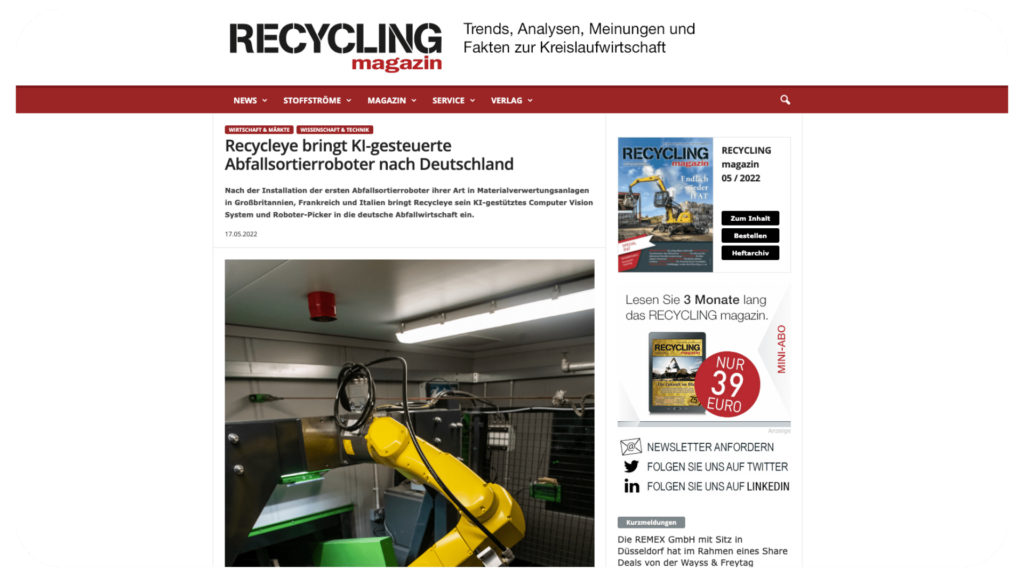 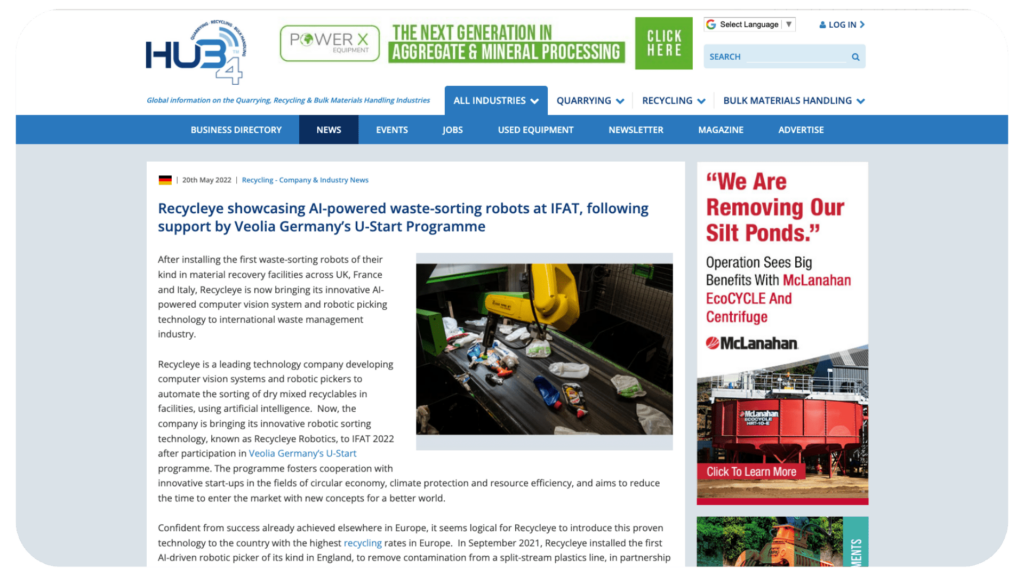 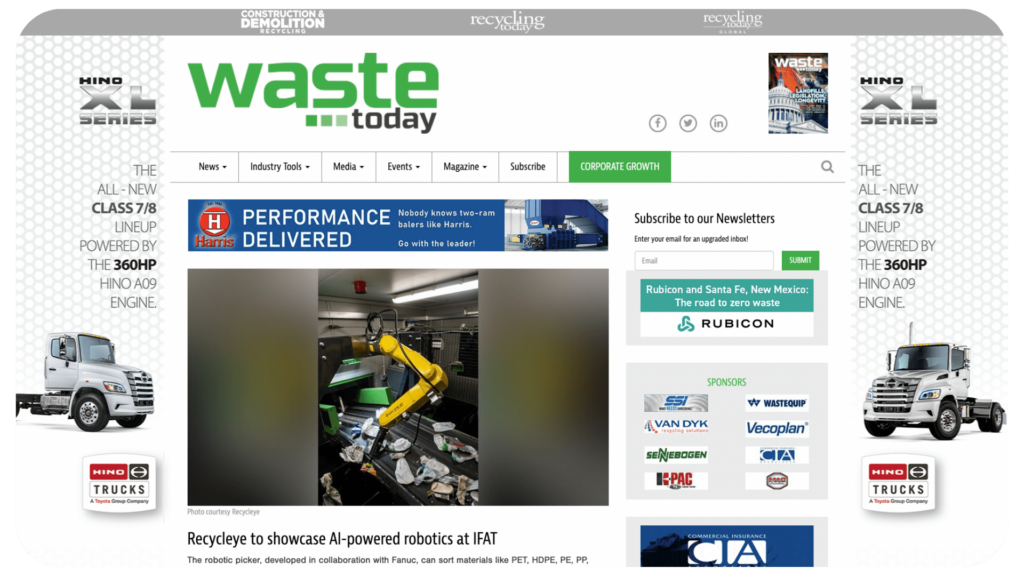