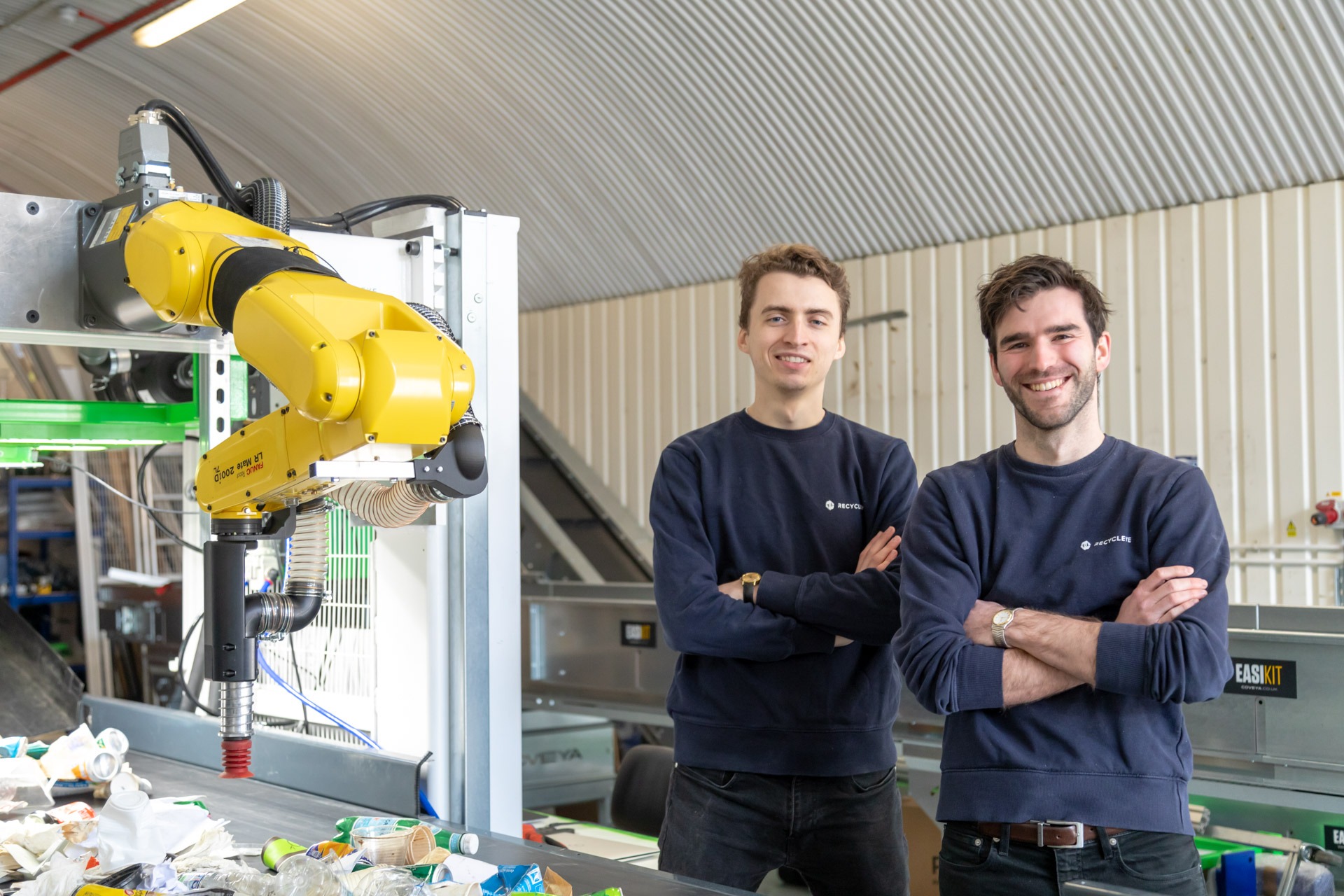 We are so very proud to announce that our founders, Victor Dewulf and Peter Hedley have been nominated for the first-ever European Patent Office Young Inventors award.

Victor and Peter are jointly named as one of three finalists of a new prize awarded by the European Patent Office (EPO) for Recycleye Vision and Recycleye Robotics, in an announcement by the European Patent Office (EPO), which names the engineers as shortlisted for the inaugural Young Inventors prize for their AI-driven waste recognition and robotic sorting technologies. Starting out with a treadmill, a camera and a pile of waste collected from bins in Hedley’s hometown of Poole, the two entrepreneurs have turned their intelligent waste sorting system into a promising business, raising millions of euros in funding.

Their two-part invention consists of a computer vision system that uses artificial intelligence to accurately identify different types of waste items, and a robotic arm that moves on six axes to autonomously pick out valuable material from a recycling conveyor belt with mixed, low-value waste. Recycling facilities can use these two elements alone or together. The aim is to increase the purity, and therefore the value, of recycled waste bales, boosting the financial incentive to recycle.

“With their twin waste recognition and sorting solutions, Victor Dewulf and Peter Hedley are making a vital contribution to reducing the world’s waste and moving towards a circular economy,” says EPO President António Campinos, announcing the Young Inventor prize 2022 finalists. “The speed at which they have not just developed these innovations, but also turned them into reality, is remarkable and we look forward to seeing their story unfold.”

The Belgian/British inventor duo met as undergraduates at the University of Bath and is jointly named as one of three finalists of the new Young Inventors prize, which the EPO established to encourage the next generation of inventors. The prize recognises young innovators aged 30 or under who have developed solutions to tackle global problems and help reach the United Nations Sustainable Development Goals. The winners of the Young Inventors prize 2022 will be announced at the European Inventor Award virtual ceremony, which will be held on 21 June.

Sorting waste to enable recycling is highly challenging, with one of the biggest problems being that separating plastic and other valuable waste from low-value, mixed waste is largely manual and can be prohibitively expensive. By automating the process using AI, Dewulf and Hedley aim to increase the proportion of waste that is recycled, addressing the negative environmental impact caused by the disposal or incineration of municipal solid waste.

“Our visual recognition system can run on the fastest belts within a waste plant, which our competitors can’t do,” says Hedley. “The AI prioritisation of waste picking helps us get to about a 300% performance increase — and a 300% increase in the bottom line for our facilities really helps them and their margins.”

Recycleye Vision, the computer vision system, uses a cellphone-quality camera mounted above waste conveyor belts to take 60 photos of the passing waste per second and send them to an algorithm, which ranks them for picking priority. Instructions are then sent to the Recycleye Robotics sorting arm, telling it where to pick up and place the waste. The entire solution can make 55 successful picks from a conveyor belt every minute.

The invention took root in 2018 when Dewulf and Hedley were both studying at Imperial College London. Visiting a recycling facility as part of his Master’s course in environmental engineering Belgium-born Dewulf realised how labour-intensive the waste sorting process was. Inspired by this and his friend Hedley’s Master’s course in computer science, Dewulf wrote his thesis on waste sorting automation using computer vision. His idea soon attracted attention in a market that was ripe for digitalisation and in 2019, Dewulf enlisted Hedley to develop a prototype computer vision-powered waste recognition system.

After training their initial computer vision system in Hedley’s parents’ garage using a treadmill covered with trash to simulate a recycling conveyor belt, Dewulf and Hedley founded their company, Recycleye, in 2019. With seed investment of GBP 800 000, they started working on developing their robotic sorting arm in partnership with the robotics firm FANUC in 2020. By the end of that year, they had deployed their Recycleye Vision system not just to France but also locally for the UK waste management firms Biffa and Re-Gen. In March 2022, Recycleye was awarded a share of funding from UK Research and Innovation’s Smart Sustainable Plastic Packaging Challenge to lead an R&D project deploying the company’s AI-powered system.

Best of luck to our founders for 21st June!